The modern city emblem portrays in the azure field smiling sun with golden rays of sixteen.

FLAG cities in the blue rectangular with a ratio of 2:3 parties - smiling yellow sun.

History of the symbols of the city

Coat of arms approved on September 5, 1967 It is a turquoise shield, which pictured gold sun, disclosed book, the contours of the Old Castles and gear. In chapter - the image flag USSR.

February, 1859 B. Kenya has developed a draft of a new coat of arms of the city: the azure field smiling golden sun, which is - a gold cross. The shield is crowned with a golden crown urban vershoks with three gold and two obramlen koloskami, Alexander obvitymi tape. Adoption has not received.

Coat of arms of Russian period, approved on January 22, 1796 In azure field - with the sun shining golden rays of sixteen, over it - cross. Such an emblem still used old Russian princes. To determine accession to the edge of the empire is located at the State Russian coat of arms. 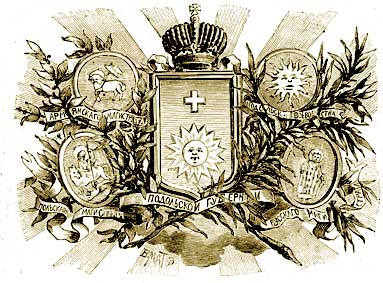 Shining with sixteen rays of the sun - reminds us of distant times when the peoples of the world, including our ancestors, worshipping the sky and celestial lights symbolic images on the rocks, cave walls, on different subjects. Sun, like other lights, was a symbol of fertility.

Actually, the emergence of the emblem as a permanent emblem belongs to the XI-XII centuries. Some cities have coats of arms and movement in the X century. painted on their flags, pechatkah Signs and money. It may be that at precisely the time the sun was shining symbol of our province. Over time, the image becomes emblem lights Podolski province. This emblem found on some architectural UIC Kamyanets-Podilsky. Shining sad, excision in stone plate, smiles us from the pediment Hall, located at the Central Square Starika city.

Lift on lowering Staroposhtovom to Vetrenym gates, bystander necessarily draw attention to two stone pillar. In one of them white plate embedded with the image of the sun shines, it withdrew from the so-called second Polish gates, which stood here before in 1832 and demolished to widen the street. In their place have referred to stone pillars.

Picture Emblem also find some documents and antique books. So. in the upper left corner of the plan Kamenetz, who was drafted in Kiprianom Tomashevichem in 1672, also depicted emblem: a sun with 16 rays and the inscription around "Podolski stronghold province". Coat of arms and Podolski found in the province gerbovnike issued in in 1728.

In Podolya in 1793 joined the Russian Empire. On the coat of arms in 1785 in the Russian State becomes mandatory for each city. For those that did not have them before, coats of arms were Geraldicheskoy special commission approved yet by Peter I.. In emblem made objects that have characterized the geographical conditions, economy and way of life of the settlement. Heraldic Commission also took to the attention of urban and traditional characters.

For the province approved the emblem Kamenetz, who previously served as emblem Podolski province. At the blue box pictured gold shield with sun rays and sixteen cross. To determine the reunification with Russia Podolie this emblem depicted on the chest double-headed eagle, which was a public emblem of Russian empire.

After the victory of old coats of arms in October was canceled. The young Soviet state could not use the old logo. It is necessary to create such displays would be that new social and economic order.

In August 1967, City Council executive committee of People`s Deputies approved for Kamyanets-Podilsky new emblem, which created a sketch artist Dmitri Brik. It is based on an ancient emblem of his - the sun shining with sixteen rays. At the top of the stamp depicts a striped shield with a red hammer and sickle emblems - symbols of work and union workers and peasants. At the blue background billboard posted silhouette of the Old Fortress, and beneath it - launched a book and gear. All the elements are of profound symbolic content. The image of Old Castles shows that the Kamyanets-Podilskyi rich in architectural reminders, recalls raging historical past. Expand book is a symbol of the flourishing education and culture city, and gear symbolizes the high level of industrial development. The new content can be put into the image of the sun in the coat of arms.

A look at the problem arise Emblem Kamenetz. 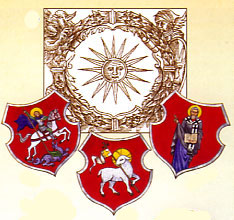 Typically, the emblem Kamentsa feel the sun. But associate emblem depicting a golden sun (whether white, whether on blue background) Kamentsom with the city, although not fundamentally wrong, however, and not entirely correct. Thus, as the capital of Kamyanets-Podilsky had direct relevance to the sun emblem, since the latter presented the land Podolskuyu. Nevertheless, the city had and his personal coat of arms, which distinguishes it from several others. I remember when "Kamyanets-Podilskyi Gazette", was printed on the front page coat of arms - to shield the sun, which had a crescent notches, it aroused debate: whether there is such a picture, because truncated Shield saw a sign for the cowardly. It must be said that a crescent notches in the upper right corner served as a shield to attack during the flagpole stick spears. But so, by the way.

As to the coat of arms Kamyanets, the issue was considered at the IX session of City Council in January 1992. Approved emblem had this kind: the blue background of golden sun with 16 rays, and above it - a gold cross. The report of the session indicated: "In the year before last deputies - after lengthy debate and a roll-call vote restored historic coat of arms Kamyanets-Podilsky in 1796. Obviously, frightening connection colors: yellow and blue ".

Nevertheless, when the stories appeal to the terrain, it can say that in ancient than in 1796, Kamenetz retrospect had a different coat of arms, which is more responsive to its role. Let us turn to authoritative Polish edition of "Gore rytsarstva Polish", collected and issued in 1584 Bartoshem Paprotskim. As is known from here: "podolskoe Province took over the golden sun emblem on a white background ... City chief Kamenets ... uses for the emblem of St. Yuri (George Conqueror - ID) at stake, which beats the snake ". So, the emblem of our city was famous icon biblical story. He was granted Kamentsu, as reported by the aforementioned source, knyazhatami Russians.

What was elected just such a plot, hard to say, however, it may be better defined the role Kamentsa over the long centuries. According to "Living saints", George wins snake - and cross word. Nevertheless, "in Greek and Slavic peoples in a different interpretation of this legend, according Kotoroy he wins the dragon above all by force of arms (which is portrayed on icons fight). Hence the same tradition and is considered the patron sv.Georgiya warriors ". So, as George Pobedonosets in Christianity there is a symbol of uncompromising struggle against satanic force in the form of the snake, and Kamenets long served the same role. It is not in the XV-XVIII art. it called "antemurale hristiyanum" (i.e., the stronghold of Christianity), because the city is actively oppose rozboyu Muslim expansion.

Such an emblem Kamyanets-Podilsky used until the end of XVIII century. However, after entering Kamentsa of Russia (1793 year) emblem reviewed .. It is no accident. It is known that the image of George the Conqueror was central to the Russian coat of arms, where the double-headed eagle on the breast shield depicted with a well-known story. Pobedonosets George was the patron of Moscow and the Moscow principality, and, thus, no longer had to be patronized. Why is it so happened that, and Moscow, and Kamenetz were identical coats of arms - say seriously. Most of all, here played a role her Velichestvennost Randomness. 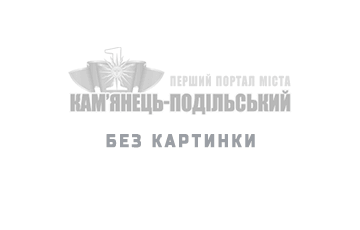